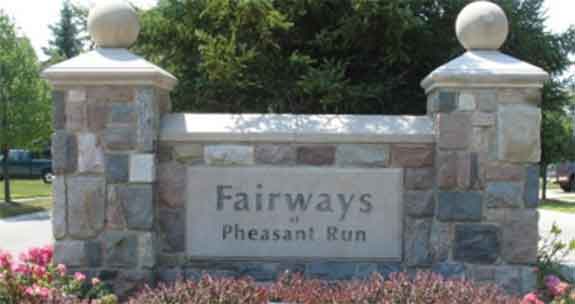 Recycling loads with contamination are rejected from the recycling facility. Canton is asking residents to be vigilant in their recycling efforts by keeping contamination out of recycling carts.

Not adhering to the recycling guidelines, along with the poor materials markets, is having a negative impact on recycling nationwide. Residents should ONLY place clean, acceptable materials in their recycling cart. Failure to comply with Canton's guidelines will impact our program going forward through increased rates, restricted materials lists, temporary recycling bans, or a combination of any of these.

To view a list of what is and is not accepted in your recycling cart visit https://www.canton-mi.org/230/Automated-Recycling

Welcome to the new Fairways at Pheasant Run web site!

Neighborhood Traffic – PLEASE SLOW DOWN!
For the safety of everyone in our subdivision, especially the large number of children who live and play here, please obey the law and stop at all stop signs, including those at golf course crossings, and do not exceed the speed limit of 25 miles per hour throughout the neighborhood.

Property Additions and Improvements
If you plan to make any major changes to the exterior of your property, please be sure to get the approval of the board and township before you proceed.  You can contact the board with a description of your plans through the HOA website.  (Article VI of Fairways bylaws)

Please Clear Storm Drains and Gutters
We ask that you rake and properly dispose of accumulated debris from street drains and gutters that are adjacent to your property.  Performing this task will help to keep our streets from flooding in the event of heavy rains.
Did you know - Anything that goes into our street and backyard drains discharges directly into our creeks, streams, and rivers.  Dumping into storm drains is not just wrong, it’s illegal.  To protect our precious water resources and the wildlife that live there, please make sure that ONLY RAIN GOES INTO OUR DRAINS.  Spread the word.

As potholes are identified, the locations are shared with Canton Township & PRRMA to address as soon as possible.  Delays can be due to supplies and weather.  Please bring any potholes to the attention of the HOA.  Thank you!